Gujarat : It’s official now. The Gujarat Government has given an administrative approval for the much-awaited bridge over Mindhola river, connecting Surat and Navsari districts.

The long-delayed bridge project on Mindhola river will not only increase the popularity of Ubhrat beach as the important tourist destination, but the dream of the Surtis to get a new greenfield airport in Navsari’s Jalalpore taluka may take wings as well.

The Gujarat Government has given the administrative approval for the construction of the bridge over Mindhola river connecting Abhava village in Surat and Ubharat village in Navsari district at an estimated cost of Rs 300 crore. About 50% of the cost will be borne by the Roads and Building department of the Gujarat Government, while the rest will be borne jointly by the Surat Municipal Corporation (SMC) and the DREAM City Limited.

Ubhrat is an important as a tourist destination for the Surtis. At present, people of Surat use Udhana-Sachin-Maroli as well as Maroli-Ubhrat road to reach Ubhrat beach. The travel distance by road is 39 kilometers, which takes about one hour. However, the bridge over Mindhola river connecting Surat and Jalalpore taluka in Navsari district would will cut short the distance by less than 15 kilometers and travel time to less than 25 minutes.

Official sources said the length of the bridge over Mindhola river is about 3-km and that the roads from the approach end from both the sides— 4.5 km at Vesma-Maroli-Ubhrat and 6.5 km at Abhava, DREAM City in Surat—will be developed as part of the bridge project.

Sources said the proposed road connecting the Mindhola river bridge passes from the Diamond Research and Mercantile (DREAM) City and SMC limit. The Dream city is located on the area of 700 hectares housing the world-class Surat Diamond Bourse (SDB).

The bridge connecting Surat and Navsari district is set to spur the development of affordable housing in Jalalporeut taluka in Navsari district. Ubhrat village attracted huge investment in property deals, a decade ago, when the proposal for the construction of the bridge over Mindhola river was first moved.

A senior AAI officer on condition of anonymity said, “AAI was the first to propose the state government for the alternate airport within 40km radius of Surat. Once the Mindhola river bridge will be constructed, it will pave way for the new greenfield airport project. Surat airport will also witness increase in passenger traffic as the travel time from Navsari will be reduced to just 15 kilometres”

In 2018, Surat district administration had submitted a report to the Chief Secretary regarding the 2,000 hectare of government land available at the Vansi-Borsi and Mangrol villages of Jalalpore taluka in Navsari district for the development of greenfield airport.

In a meeting held between the AAI Chairman and Chief Secretary on February 23, 2018, apart from development of existing Surat airport, development of an alternate airport was also discussed, for which the State Government agreed to identify few sites and forward the site coordinates to AAI for examination.

Surat’s district collector, in a note forwarded to AAI on September 22, 2018 stated that the required government owned land of about 2,000 hectares is identified near Jalalpore taluka in Navsari district. The proposed site is about 35 kilometers away from Surat, but the distance could be reduced to about 15 km by constructing a bridge over Mindhola river. The site is also near to Navsari at 15-20 kilometers and that the airport facilities will serve the twin cities.

Why greenfield airport in Navsari?

The existing airport at Surat is severely land constrained with just 300 hectares of land. Despite being the second busiest airport after Ahmedabad, Surat airport’s expansion is constrained due to the obstructions by the residential as well as commercial buildings in its air funnel zone.

The demand of AAI for the 38 hectares of land for the extension of runway from 2,905 metres to 3,905 metres, 800 hectares land for parallel runway and integrated airport terminal etc. are yet to be fulfilled by the State Government due to the fact that most of the land is owned by private parties.

Also, the Dream City project in Khajod is in the funnel zone of the Surat airport and that the building heights for the entire project area and other residential and commercial projects is restricted to less than 53.84 metres above mean sea level.

Further, expansion of Surat airport is not possible as government owned land is not fully available near the existing airport as majority of the land is privately owned and hence the acquisition may take a long time. 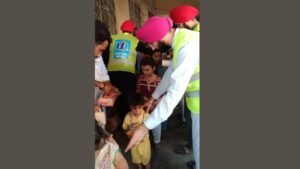