New Delhi (India), April 16: MuskMelon, a utility token developed on Binance Smart Chain and Ethereum, took the world of NFTs (Non-Fungible Tokens) and Gaming by storm. MuskMelon was listed on Bitmart and XT platforms on 15 April 2022. Within the first hour of trade, The Melon token was up by 2900% and rose nearly 6000% within a few hours, giving heavy profit for investors. 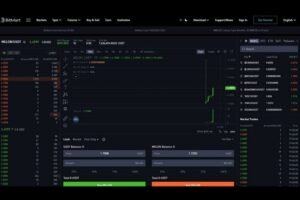 To tap the growing interest in NFTs and Gaming, the creators of the MuskMelon project had launched 10 billion Melons, which is the native currency and can be used for buying Non-Fungible Tokens, in-game assets, and even for other purposes. Five billion of these were released initially at a special launch price of $0.05 per Melon.

According to Neal Mathews, Project Advisor of MuskMelon “Someone who’d have invested 1000 USD at 5c would have gotten 30K USD! and gauging from the trend. It only looks to be on a severely strong climb!”

Globally it is said that the gaming industry will hit $ 218.7 Billion along with a sustainability growth percentage of 8.7% per year. When we see the gaming industry the number of gamers is increasing exponentially. The current state of the gaming industry has many components like face recognition, cloud gaming, and virtual reality. It has been seen that the children who are into gaming are performing better in academics.

Digital assets and collectibles help in creating non-fungible tokens that are used in blockchain technology. We all are aware that technology is constantly evolving. This phenomenon of the fast evolution of technology is known as accelerating change. When the technology improves or redesigns it brings changes to the future generations at a faster pace. The technology frontier on this front is evolving at a continuous pace and humans are continuing to expand and explore the endless world of technology through various new pathways like artificial intelligence and blockchain.