Apernah has been a singer and songwriter since the year 2019. The song ‘DHAK DHAK KARNE LAGA’ is about an artist’s transformation, an amicable resolution sincerely accepted by T-Series’ Mr. Krishan Kumar. Music Director Harry Anand wrote this song. Kaata Laga, Kaliyon Ka Chaman, Koi Sehri Babu, to name a few, are some of his well-known songs.

Apernah is an INFJ, which is why her first song, INFJ, is based on a passage from her journal. Apernah hopes that her work would motivate women to be more independent and achieve their aspirations by demonstrating the strength that a woman possesses by surging herself. Her family had never heard her perform before she sent them the song, so they had no idea about her singing and songwriting abilities.

Apernah’s music is definitely for discerning music fans who enjoy writing things down and reacting to the music. She is a well-known model and performer with a multifaceted work emphasis. She has appeared in television commercials for Idea 4G, Lakmé, Radio Mirchi, Oppo, and Max Fashion, as well as modeled for Inega, Elan, and Toabh.

For decades, the T-series has been creating modern and outstanding undiscovered talent. After reviewing her work, Mr. Kumar praised the self-taught singer-songwriter and poet. “She’s pretty original, contemptuously reliable, and testifies to endure uniqueness towards any specific genre,” Mr. Krishan Kumar says. “Her devotion to her mission to yield remarkable highlights of her self-written songs is overwhelming,” he added.

Currently, Apernah is working on a single, two OTT movies, and a full film. At such an early age, her labour has made her unstoppable. Filmmakers have also sought her because of her musical knowledge and ability to compose strains and lyrics in unusual patterns.

Also Read  Bhuj The Pride Of India showcases the war era of 1971 with lifelike sets, fighter jets and the biggest action sequences

Please go to https://youtu.be/k8BYJVCRnSE to listen to the song. 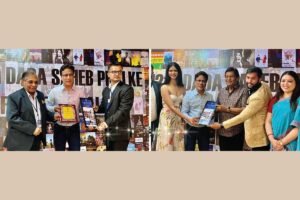 Farhan Akhtar received the 12th Dada Saheb Phalke Film Festival 2022 Award, which was presented by Raujesh Kumar Jain, who was present as a chief guest.